Groundwork Jacksonville is fortunate to have the support of VyStar Credit Union (VyStar) as one of our major donors to the Emerald Trail and McCoys Creek projects.

VyStar has a history of supporting its members and the community, but in recent years under the leadership of CEO Brian Wolfburg, VyStar’s commitment has become increasingly felt, not just by members, but by all the citizens in Jacksonville.

In 2019, VyStar acquired naming rights for the Jacksonville Veterans Memorial Arena. The multi-million dollar deal not only provides the City with needed funds to support the facility’s maintenance, but a portion of the money also goes to support veterans programs. Additionally, VyStar bought and is renovating the 23-story tower at 76 S. Laura St. and the former Life of the South Building at 100 W. Bay St., and intends to move more than 1,000 employees downtown.

This year VyStar committed $2.5 million to fund a new Cultural Ecosystem exhibit celebrating Jacksonville’s diversity as part of MOSH’s $80 million expansion. And most recently, VyStar collaborated with the City of Jacksonville on a loan program to assist local small businesses affected by the pandemic-induced economic downturn.

GWJax is grateful not only for VyStar’s generous contributions, but also to have Brian Wolfburg’s boundless energy and enthusiasm for the future of downtown in his role as our Emerald Trail co-champion. 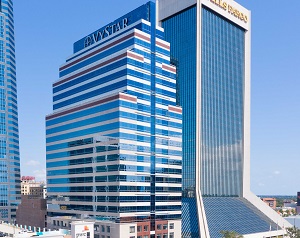 Photo Exhibit Highlights the Peril and Potential of Our Urban Creeks